Posted on February 6, 2018 by roadtripsandtinytrailers

According to Reference , the definition of a ‘River Basin’ is:

‘the land water must cross to reach a river. A river basin collects all available water from various tributaries, creeks and streams in its area.’

Your Dictionary adds this information to the definition of a ‘River Basin’:

“the area drained by a river and its tributaries”

noun: (geography) An extent of land where water from rain or snow melt drains downhill into a river or series of rivers.

People come from all over to experience camping out near the water. Whether it’s to  fish, swim, do a little tubing, kayaking or canoeing, or just to relax, we love to head to the water’s edge!

But before we don our waders, strap on those swim fins or grab for the mosquito spray,  maybe we can learn a little about how our rivers came to be and the importance that they have for us now!

BASIC CHARACTERISTICS OF A RIVER BASIN:

*A river basin collects all water from an area, then moves it through its system of branches, arteries and tributaries, where it eventually empties into an ocean or lake.

*A water system starts at a ‘first-order stream’ which originates from a spring underground. As water moves it forms second and third-order streams which then flow into rivers and on to a final lake or ocean.

*A water system is depended on rainfall and the runoff of the rain water to fill the streams and begin its journey through the water system.

*A river basin is generally made up of many areas called watersheds (or catchments).

*A river basin can contain multiple watersheds that collect water from streams, lakes and rivers of different sizes.

*Lakes are formed when the downward flow of water from the watershed is stopped due to a depression in the land.

*The Mississippi River Basin is the largest in North America and the 3rd largest in the world at about 2,320 mi long.

*The Continental Divide separates the water systems that will eventually end up in the Pacific Ocean from those that will end in the Gulf of Mexico.

*River Basins are vital to human existence, since they provide clean water for drinking; water for growing food; and water to nourish plant life, which provides the oxygen people breathe.

*River Basins are found in every region of the U.S.

Rivers are a joy whether you’re in them, on them or just admiring them, but they also demand our respect.  Be cautious, be prepared and be awed by the magnificent Rivers and River Basins in this beautiful country of ours! 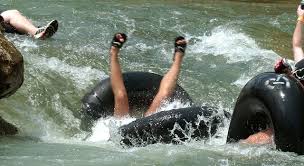