Posted on February 9, 2018 by roadtripsandtinytrailers

As we travel across the country, we find that much of the U.S. is covered by some sort of forest.  Did you know, however, that there are many kinds of forests all with distinct characteristics? Next time your enjoying the pretty wooded section of your campground, see what you can discover about your surroundings!

According to Merriam-Webster, the definition of a ‘forest’ is:“a dense growth of trees and underbrush covering a large tract”

(Wow!..betcha couldn’t figure that out on your own…!)

A. BASIC CHARACTERISTICS OF A FOREST:

Forests are so much more than a large group of trees.  Without forests there would be no life on earth!  Here are a few facts that are true of all forest types:

*Forest is a type of ‘Biome’, (which is defined as: ’A large community of plants and animals that occupies a distinct region’).

*Forests are home to 80% of the world’s plants, animals, fungi and bacteria.

*Forests control climate change because they act as a ‘carbon sink’. They soak up carbon dioxide and other greenhouse gases that would otherwise contribute to changes in climate patterns.

*Approximately 1/3rd of the earth’s land is covered by forests.

*Forests contain about 70% of carbon present in living things.

The Forest Floor:  which is where recycling takes place. Insects, bacteria, earthworms, fungi and other organisms break down all the waste and all the decaying materials and reuse it as nutrients for the forest.

Herb Layer: This layer is dominated by soft stemmed plants, ferns, grasses and other ground covers.  This layer protects new growth as well as insects, rodents and tiny creatures.

Shrub Layer: The layer contains the woody vegetation like shrubs and brambles that protect birds and small animals.

Understory Layer: This layer contains the small and immature trees that provide protection and food for the animals that live in the forest.

Canopy Layer: This is the highest layer of the forest where the tops of the trees meet and form a thick layer.  Here is where air, water and sunlight are absorbed and here is where the most food is produced.

B. SOME COMMON TYPES OF FORESTS:

*Rainforests are found in areas where the temperature remains between 70 and 85. There are not distinct seasons there and the average rainfall is 100-200 inches each year

*The trees in a Rainforest are so dense that it takes about 10 mins for a raindrop to fall from the top of the canopy to the ground.

*The lifecycle of a Rainforest dictates that there are both ‘new’ and ‘old’ sections of the forest.

*There is no dirt on the ground of a Rainforest and it is so dense that there is no room for new growth.

*When a tree dies, it falls and becomes a ‘nurse log’. This is where new growth can take root as there is no room on the ground floor.  Thus, the ‘old’ section of the forest then becomes the ‘new’ section and the circle of life continues.

*Rainforests are critical to the sustainability of the earth as they help maintain the earth’s drinking water.

*About ¼ of our natural medicines come from Rain forests

There is only one Tropical Rain Forest in the U.S. and that is the Hoh Rainforest on the Olympic Peninsula in the State of Washington.  Some sources argue that the Hoh is actually a temperate forest.  We’ve seen it and we disagree!

*The largest Temperate Forests in the world are in North America and are distinguished by broad leaf varieties of plants and trees.

*There are 4 distinct and equal seasons in a Temperate Forest.

*The temperature remains between -20 and 90 degrees.

*In a Temperate Forest, while trees are leafless during the dry season, many actually flower which aids in pollination and produces colorful autumns.

*Most plant species in the Temperate Forest are those that grow best in shade as the canopy blocks 70% of the sunlight.

*Scientists speculate that there could be as much as 500 tons of living things per acre in a Temperate Forest.

*Most of the animals in the Temperate Forest live on the ground.

Temperate or Deciduous Forests can be found in the Appalachian Mountains, Western Washington State, Oregon and Northwestern California.

*A Boreal Forest is a Coniferous Forest that is located in the northern hemisphere.

*The Coniferous Forest is the largest biome on the planet and makes up 1/3rd of the earth’s forests.

*Coniferous Forests are mainly made up of cone-bearing trees        that stay green all year long.  These trees grow close together so that they can withstand the cold.

*Coniferous trees have branches that are soft, flexible and usually point downwards, so that snow slides off them.  They also have needle-like leaves with a waxy outer coat which prevents water loss in freezing weather.

*Conifers shed their needles every 2-5 years.

*Due to the acidity in the needles of the coniferous trees, the soil in a Coniferous Forest is poor and acidic. Therefore, only plants and trees that can withstand acidic soil (and the animals that eat them) can survive here.

*Needles from Coniferous trees fall to the forest floor and form a thick springy mat. Thread-like fungi help to break down and decompose the fallen needles which provide the nutrients that then return back to the roots of the trees.

*The trees that grow in a Coniferous forest are softwood and are only good for making paper.  Therefore, the coniferous forests are the type of forest least affected by humans and deforestation.

*Fire in a Coniferous Forest is vital for the health and diversity of the forest.  Healthy, normal and spontaneous fires burn low to the ground and clean up the understory on the forest floor.  The ash that is left then become the nutrients for new growth.  Fire melts the wax of the pinecones releasing the seeds.  Without fire, a coniferous forest cannot reproduce. Fire-adapted coniferous forests can be some of the most diverse ecosystems in the world!

*The oil of a pine needle is toxic to other growth on a forest floor and saturates the soil under the trees. This helps keep necessary forest fires low to the ground and naturally containable.

Coniferous Forests can be found all throughout the Northern parts of the U.S. and most of Canada.

Well, that covers most forest types with just a few bits of information.  Next time you’re in a forest, see what you can learn! 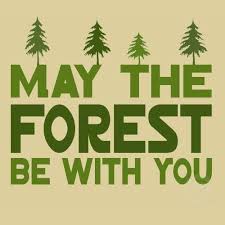