Posted on January 30, 2019 by roadtripsandtinytrailers

Although in close proximity to the ‘Bible Belt’ region of the U.S., the states of Kentucky, Tennessee, West Virginia and Ohio have a religious distinction all their own.  Bluegrass music is the voice of the entire region, and Christianity is incorporated into the genre through Bluegrass Gospel music. Bluegrass is not simply about the music but also defines the culture.  It encompasses all ages, races and genders.  Music has defined the people of Appalachia and their lives – including their religion.

A). A LITTLE BIT ABOUT BLUEGRASS GOSPEL MUSIC HISTORY:

*Religious country gospel was the most prevalent music heard in the Appalachian area during the colonial period (1700’s).

*During the Colonial period, the press was controlled by clergy that had no interest in the spread of secular music, therefore, not much of the secular music survived in written form.

*There were three types of religious music: ballads, hymns, and revival spiritual songs. The spiritual types arose out of the African song tradition. These were popularized among the white inhabitants after the revivals started in Kentucky in 1800.

*African immigrants, now many of them Bible believing Christians, incorporated the songs of the Second Great Awakening with the old time sting band instruments to develop what was called Mountain Gospel Music which was the forerunner to Bluegrass Gospel music.

*This type of music was developed by Christians, but not from organized churches but rather from individuals who brought the music to the church.

*There are three styles of Gospel music that were developed. These styles where developed independently of each other because of racial and physical separation:

-Mountain Gospel developed in the Southern Appalachian Mountains. This music (also called “hillbilly music”) sprang forth from a people living deep in the hills. Bible believing and devoted, religious music formed a major part in the life of these rural peoples not only in their worship services, but as a part of their daily existence as well.

*By the early 1900’s, Gospel music had become mainstream and saw the emergence of publishing companies, schools, musical periodicals and songbooks dedicated to this new genre of music.

The combination of lyrics about the Savior with the bluegrass string band produced what we now call Gospel Bluegrass Music. A music genre different from traditional bluegrass in that, while it maintains the snappy, upbeat style of the Old Time String Band, it leaves out the lyrics of misery while adding themes that can lift the soul and remind us that King Jesus is right here beside us helping us along the way. They also remind us that at the end of life’s journey there is a crown awaiting and entry into eternity with God.

B). HOW RELIGION GOT STARTED IN BLUE GRASS COUNTRY:

*Missionaries in this region had begun activity as early as 1623.  Jesuit, Moravian and Methodist churches sprung up as the Native Americans were exposed to the Gospel.

*As these territories were gaining statehood between 1792 and 1863, people moved in because of the fertile soil and a common faith.

*People believed that the American society was too corrupt to be reformed, so they sought separate societies.

*Most of those flooding into the Blue Grass region were Protestants following the Anabaptist movement and the practice of Believer’s Baptism (baptism of adults upon profession of faith).  Many referred to the area as “Canaan’s Happy Land”. 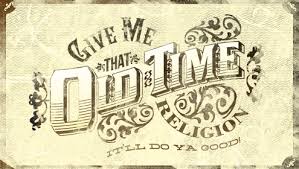 *Early Protestant Christian faith focused on individual piety and an unsupervised clergy rather than well-developed structure and practices.

*As denominations organized, faith relying on biblical literalism, localized control, power of the Holy Spirit and the exercising of spiritual gifts cemented.

*The Great Revival of 1800 (that started in Kentucky) in the long-run created a greater degree of religious diversity.  The Cumberland Presbyterians and the Disciples of Christ emerged from this fragmentation.

*By 1900 there were more than 30 religiously affiliated colleges and universities in Ohio alone.

*By 1930 nearly all people in the region belonged to a church denomination.

*In the 1930’s, Tennessee became a leading publisher in religious literature headquartering in Nashville.  The Southern Baptist Convention also settled in Nashville.

*In 1957 the Evangelical Church and the Reformed Church merged to form the United Church of Christ.  The headquarters remains in Cleveland.

*During the Civil Rights Era, the Christian community in the region began to take a more active role in politics and social issues.

*The basic fundamental flavor of the region continues to be Protestant in nature and marked by a strongly Puritan code of ethics.

C). A FEW FUN FACTS ABOUT THE MAIN PROTESTANT GROUPS IN THE REGION:

Although differing in some things such as the interpretation of scripture and specific practices, Christian Protestant denominations have these central beliefs in common:

*God is the one and only creator.

*Jesus is the Son of God, equal to and the same as God Himself.

*The Holy Spirit is also equal to and the same as God Himself.

*Jesus Christ came to earth, was born of a virgin and died on the cross to pay the price of sin for the world.  He rose again and ascended back into heaven.

*The Bible is God’s Word

*The Holy Spirit was given to mankind at Pentecost

*Christians are called to go, share the Gospel and make disciples 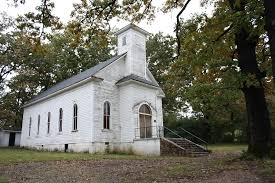 *Emphasis on Christian living, putting faith and love into action and being active with social issues.

*Leaders in the struggle for separation of church and state

*More a part of the ‘Reformer Movement’ than Protestant

*Governed by a system of elders and votes by ‘majority rules’.

*Have only 2 sacraments: Communion and Baptism 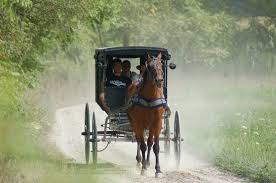 *Originated in Germany, Austria & Switzerland as off shoots of the Anabaptist movement

*Used literal interpretation of the Bible

*Practiced simple and plain living and were Pacifists

*Ohio has the world’s largest population of Amish and Mennonites

*Original ‘charismatics’ known for their ecstatic style of worship

*Original Pacifists (ones who don’t fight or go to war)

*Did not marry and practiced celibacy

*Currently there is only one Shaker village left and that is in Maine.

*Originally called the Society of Friends 7 settled in Ohio

*Christianity played a significant role in acculturizing Africans to America 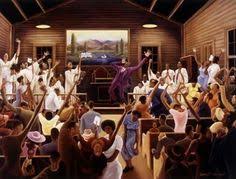 *The First Baptist Church in Nashville conducted workshops on non-violence 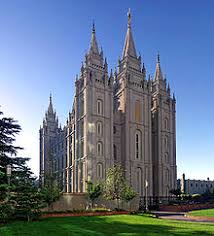 *The group first gathered in Ohio

*The book of Mormon was first printed in 1830

*After the death of Joseph Smith, the church split in half and the larger group followed Brigham Young to Utah

*The first synagogue was built in Cincinnati in 1836

*Ohio initially had one of the largest Jewish populations in the U.S.

*Sally J. Priesand was the first female rabbi ordained in the world

*In recent years, the Muslim population has increased in the Blue Grass region especially in Toledo and Cleveland

*Muslim religious centers have been established in Nashville and Memphis

Whatever your religious persuasion is, enjoy getting in touch with the roots of Protestantism as well as coming to know the personality of the Blue Grass Region.  And take in a Mountain Music while you’re there!