Posted on February 4, 2019 by roadtripsandtinytrailers

In the introduction to the ‘Fun Facts’ Category within this online planning manual, I detailed the importance of knowing some key things pertaining to the history that you will be exposed to on a trip to a particular area. I also presented the idea of dividing the U.S. into 9 Regions for the purpose of organizing those facts.  This is for the purpose of helping an area come alive to you as you learn a few facts in ‘bullet point’ style – but only a few facts so that you don’t get overwhelmed!

Here are some interesting Historical facts about Region 1:

If you are traveling to the Atlantic North East states (Region 1), you will find much of the history you’ll be hearing about has to do with the Border Disputes and the settlement of what is now North Eastern Canada and the U.S. state of Maine.  For this area’s ‘Focused Events’ (historical events that the area is most known for), we’ll be tackling the wars and disputes that this region saw as its borders fell into place between 1600 and 1860.

A). A FEW INTERESTING BITS OF INFORMATION:

*When Acadia was under French control, it was called Acadia, but under British control is was called Nova Scotia.

*Acadians are descendants of the original French settlers.

B). FOCUSED EVENTS IN ACADIA:

*1604: Acadia was initially settled by France.

*1613: Virginians destroyed the town and scattered the inhabitants causing new colonies to spring up and the French occupation to grow.

*1621: Unsuccessful attempt by the British to colonize Eastern Acadia – which they renamed Nova Scotia – increases tension between the British and the French

*1670: Hubert de Grandfontaine takes Acadia back for the French.

*1697: Treaty of Ryswick brings King William’s War (which was fought between Louis XVI of France and Austria in Europe as allied forces tried to curtail the ambitions of King Louis)   to a close and leaves France in control.

*1710: British and colonial forces join to capture Port Royal for the British and renames it Annapolis.

*1713-1763: Constant disputes between Britain and France over the definition of ‘ancient limits’.

*1751: The building Fort Beauséjour on the Missagwask River, by the French confines the English to the peninsula for forty years.

*1755-1763: Due to tensions between Britain and France, 10,000 Acadians were deported to the 13 colonies, France and Britain.  Britain thought that they were a threat to the appropriation of the land.  This Deportation was called ‘The Great Upheaval’.

*1740-1764: King George’s War, The French and Indian Wars and the Seven Years War leaves Great Britain in control of all of Acadia, which passes away in favor of the establishment of Nova Scotia and New Brunswick.

*1763: Treaty of Paris ends the French and Indian War.

*1775-1783: The people of Nova Scotia, Quebec and Prince Edward Island decide not to join colonial forces against Great Britain in the Revolutionary War.

C). SO WHERE DOES MAINE FIT INTO THE PICTURE?

*1622: Sir Ferdinando Gorges and John Mason are granted rights to the land which makes up what is now Maine and New Hampshire. Gorges became the first person to title the territory “Maine”.

*1652: Maine is annexed as a frontier territory by Massachusetts. The strategic importance of Maine is established as Massachusetts officials considered it the first line of defense against potential French and Indian invasions.

*1775: First naval battle of the Revolutionary War occurs off the coast of Machias.

*1775: Benedict Arnold marches a band of revolutionaries through Maine in a failed attempt to capture British strongholds in Quebec City and Montreal.

*1819: Massachusetts agrees to allow The District of Maine to petition for statehood.

*1839: Governor Fairfield declares war on England over a boundary dispute between New Brunswick and northern Maine. This is the first and only time a state has declared war on a foreign power. The dispute was settled, however, before any blood was shed.

*1851: Maine is the first state to outlaw the sale of all alcoholic beverages.

D. WHAT ABOUT VERMONT? 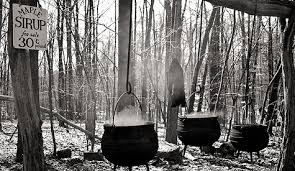 *Abenaki speaking Native American tribes inhabit the Vermont area for an estimated 10,000 years and were the original maple syrup producers.  Prior to British colonization, the area was primarily a thoroughfare between the French/Native-American settlements to the North and English settlements to the South.

*1731: French arrive in the Vermont territory.

*1761: The town of Windsor was established and became called the ‘Birthplace of Vermont’. The production of maple syrup becomes more refined.

*1763: France cedes Vermont to the Britain after the ‘Seven Years War’.

*1763-1777: Settlers from New Hampshire and New York who owned land grants disputed control of the area.

*1777: Disputing settlers come together establishing the Vermont Republic which lasted until 1791. The Republic was the first of any future U.S. state to partially abolish slavery.

*1780: Last Indian raid led by the British happens in Royalton.

*Vermont is one of only 4 states (along with California, Hawaii and Texas) that were previously sovereign states.  A sovereign state is a geographic area or territory with a centralized government and is not dependent or subjected to any other power.

*1867: Canada becomes an Independent British Dominion (which means that it was a British founded colony that gained its own governing power).  That lasted until 1982 when the Constitution Act of 1982 gave Canada its full rights to govern without British approval.

*1873: Creation of the Royal Mounted Police in Canada

*1914: Canada joins Australia and New Zealand on the Allied side of WW1.

Well there you have just a few tidbits of historical information that will hopefully help you enjoy your road trip into the North Eastern corner of North America!