ARCHITECTURAL STYLES SUMMARY FOR THE TRAVELER

Posted on March 16, 2019 by roadtripsandtinytrailers

Exterior architectural styles are reflective of deeper cultural values and can represent a particular place and time. When the spread of cultural ideas, politics and fashions across the country was slower, certain architectural styles remained in style for multiple decades or longer, and often revealed a distinctly regional identity.

Here in this summary we’ll explore some of the more common architectural styles of buildings and homes that you might get to see on your travels.  Let’s see what those styles can tell us about the history, politics and culture of their times!

Built by ancient Puebloan people * Made with sticks, mud and grass * Built into cliffs and caves * Intended for community living & worship

Built in the style of the Mother country but altered to the needs of the Colonies * Have two or three stories, fireplaces, and brick or wood facades * Floor plan has the kitchen and family room on the first floor and the bedrooms on the second floor * Easy to add on to at the side or the back.

Named for the 4 Successive King Georges (I, II, III & IV) * Reflected Colonial growth and prosperity * side-gabled roof and a symmetrical arrangement of windows and doors on the front façade * Meant to be more formal * Based on the classical architecture of Greece and Rome

Result of a revival of Greek & Roman thoughts and ideals * Characterized by grandeur of scale & simplicity of geometric forms * Uses Roman details such as columns, polished marble and blank walls * Adornments based on Greek and Roman mythology * Clean style with hard edges * Still had English flair 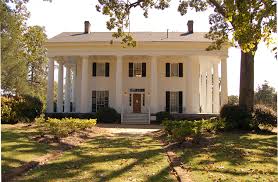 Prompted by Queen Victoria and the long period of peace during her reign * The industrial revolution sparked a boom in the housing industry making elaborate homes more affordable * Blended Gothic, Greek, Indian and Italian styles * Nicknamed ‘Gingerbread houses’ due to the fine detailing of spindles, ornate windows, and textured shingles. Intended to be individualistic and have disproportionate porches and an asymmetrical design.

As skyscrapers went up, new styles emerged based upon the new and innovative technologies of construction and the use of glass, steel and reinforced concrete *  A ‘Modern’ look means simplicity in form and design * Characterized by clean lines, basic shapes, simple forms, geometric lines *

Many other styles emerged during this time period depending on location and need:

← ART STYLES SUMMARY FOR THE TRAVELER
ART & ARCHITECTURE: HOW TO USE THIS CATEGORY (Fun Facts) →

4 Comments on “ARCHITECTURAL STYLES SUMMARY FOR THE TRAVELER”