Posted on February 5, 2019 by roadtripsandtinytrailers

Up until Approximately 500 A.D.

History in America obviously starts long before America was America, or North and South America were independent from each other.  In fact, the entire continent was thought of as one huge landmass with (what would become) the Isthmus of Panama narrowly connecting the two larger parts.

Since written records and documented history wouldn’t significantly show up until after the Europeans found their way to the Americas, learning about the history of the early peoples on the American Continent is primarily limited to oral the traditions that have been handed down.  Needless to say, information is controversial and scarce, but we’ll do the best we can.  Here goes:

The first people to arrive on the American continent were from Asia.  These early, brave folks made their way on foot from Asia into Siberia, across the Bering Land Bridge into Alaska, and eventually down into the lower parts of the continent.  The land bridge that allowed travel by foot is now under the waters of the Bering Strait.

Here’s what we do seem to know about the earliest Americans dating up to around 500 A.D.:

*The people brought with them a Stone Aged culture called ‘Clovis’ and have left behind artifacts and arrowheads (called ‘Clovis Points’).  The ‘Clovis’ title came from the site of the first artifacts discovered near Clovis, NM.

*The Clovis people are often referred to as Paleo-Indians, although there is debate on the subject.

*The Clovis culture spread into hundreds of different groups as the people spread out in pursuit of the giant mammals that they were hunting, including mastodons, caribou, bison, and mammoths.

*Some of the splintered groups became gatherers as they adapted to different areas of the country.  Most groups existed on a combination of hunting, gathering, and fishing all depending on the areas that they had settled in.

*The gathering groups eventually began planting and farming which evolved into the cultures that the early explorers from Europe encountered.

*It appears that these groups had communication with each other and possibly did some trading.

*Some of these groups became Mound Builders which were ceremonial mounds built to honor the sun god.

*These people became extinct about 9,000 years ago, taking with them the secrets of their life.

*Evidence has determined that the Clovis people are the direct descendants of the Native American Tribes. 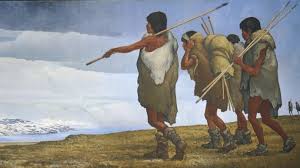 Well, maybe we don’t know a lot about the history of America’s early ancestors, but it’s good to know how the cultures we have come to know got their start!

You can find the artifacts and sites of the Clovis People all over the Southwest as well as scattered throughout North America.  Next time you are on the road, check out the original people that have blazed the trails before you!