Posted on February 6, 2019 by roadtripsandtinytrailers

The area that we call ‘New Europe’, comprised of Nova Scotia, New Brunswick (with Canada’s outer islands), Vermont and Maine begins its religious contribution into the New World with Roman Catholic and Puritan roots. With the discovery of the rich and valuable forests and soils in the area however, the motives of its new inhabitants quickly turned to profit and monetary wealth.  Maine and Vermont are now the two states that have the fewest number of residents claiming a religious affiliation of any state in the Union, and the lowest populations of people who claim to pray daily.

Here are a few facts about the original belief system of the settlers of the American Continent’s Northeast section, and their effects on  religion in American :

*The original Acadians who came largely from Central France were Roman Catholic with strong religious ties to the Holy Church.

*The re-settling of the area after the Revolutionary War divided the area into inland settlers and coastal inhabitants.

*Coastal communities fostered the more traditional Congregational and Puritanical practices which meant a strong respect for God and a submission to the political leaders who ruled in the name of God.  The Congregational Church eventually died out because it was too expensive, too burdensome, and too hierarchical.

*In order to be a British citizen, one had to be a member of the Anglican Church of England. The Puritans sought to reform the Church of England, often producing the same legalistic and restrictive practices and problems that they were protesting against.

*The inland settlers had a more pioneering approach and stressed simplicity of doctrine. They placed less importance on organizational leadership and de-emphasized classical learning. They encouraged spontaneous participation in corporate worship, blurring the separation between the preacher and the congregation.

*The division between the two groups eventually led to the area’s separation from the Puritan form of belief and led to the formation of revivalist sects.

*Maine, which began as a Massachusetts Province, broke away based partly on religious disagreement.  Maine began its petition for statehood began in 1785 and finally achieved statehood in 1820.

*Initially Roman Catholic, the Acadians – because of being in such a remote area – eventually accepted a service run by an elder when there was an absence of a priest.

*The Acadians had a strong belief in sorcery and the power of the devil.  This belief made the infusion with the Puritans pretty easy.

*The Acadians believed that a soul in Purgatory (the holding place of the souls of the deceased) could appear to the living.

*It didn’t take long until organized Catholic Church services only happened when there was a visiting missionary from Quebec.

*Inland settlers eventually brought in the age of revivals with their ‘revivalist’ beliefs that:

-All men are equal before God. 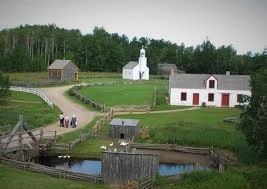 -People should be allowed freedom to participate in worship.

-People need to find their own path to heaven by good works.

-Parish priests should no longer have absolute authority above the congregation.

-Parish priests do not have special abilities to exorcise demons, heal the sick or stop forest fires with their prayers. 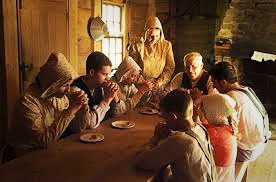 *The Acadians had a rich oral tradition that included songs, folktales, ballads and legends.  There were singers in every family.

*Acadians have a strong history in the use of natural, herbal medicines and remedies, many of which are still in use today.

The Revivalist ideology that developed in the Northeast between the late 1700’s and the mid 1800’s resulted in revivals and religious awakenings all over the Northeast.  This made way for new denominations including the Freewill Baptists, Methodists, Shakers, and Universalists.

*Compared to other U.S. regions, the Northeast has the lowest regular religious service attendance and the fewest number of people for whom religion is an important part of their daily lives.

*The sexual abuse scandal of the Catholic Church has directly affected the number of people who have opted to continue valuing religious affiliation.