Posted on January 11, 2019 by roadtripsandtinytrailers

Because what we refer to as the ‘Old West’ was initially comprised of territories and large undefined areas of land, for this section of Religion in North America, we’ll look at some general information for the region as opposed to breaking down individual states.

It’s impossible to discuss honestly the settlement of the West without talking about religion, but historians sure have tried.

Credit has been given to trappers, explorers, miners, the military, homesteaders and even gunslingers – icons everyone knows – but few could name a single religious leader whose mark was made on the West.

Most western communities owe far more to these unrecognized preachers and missionaries than they do to the high-profile outlaws or icons.

Protestants rushed into the new territories seeing the area as untamed, immoral and lacking churches and religious teaching.

Catholicism was already there and had been since the Spanish started colonizing the West a century before England set up new colonies in the North East, but English Protestants despised and persecuted Catholics fearing that they were a threat to the nation. Initially in New England, the only colony safe for Catholics was Maryland.

Religious beliefs shaped how many Americans thought about the frontier and its possibilities. Some believed their religion would “civilize” the West, saving it from evil forces, and they ventured out into unknown areas to save souls. Others’ religion caused them to seek refuge in the West as they were forcibly chased from the “civilized” East. The West became a vast testing ground for how tolerant America would become. The effects of religion on the West can best be understood by describing the experiences of three groups: the Native Americans, the Protestants, and the Mormons.

*A circuit was made up of two or more local churches.  A pastor would be appointed to the circuits by his bishop.

*During the course of a year he was expected to visit each church in the circuit at least once, and possibly start some new ones.

*At the end of a year the pastors met with the bishop at the annual conference, where they would often be appointed to new circuits.

The traveling preachers responsible for caring for these churches, became known as ‘circuit-riders’, or ‘saddlebag preachers’.

*They traveled light, carrying their belongings and books in their saddlebags.  Ranging far and wide through villages and wilderness, they preached daily or more often at any site available be it indoors or outdoors.

*Unlike the pastors of settled denominations, these traveling preachers were constantly on the move.  Their assignment was often so large it might take 5 or 6 weeks to cover their territory.

*Many Native American groups identified themselves as “the real people,” who had a special relationship with their creator.

*Native American religions were diverse and adaptable, and emphasized the interdependence of life. New traditions with more purposeful changes and adjustments were normal.

*Some Native American belief systems were based on pantheism, or worship of all gods, but many added a Great Spirit as the most powerful of the many gods.

*Many Native Americans believed that everything which exhibits power in action (such as wind, clouds or a rushing stream), or passive endurance (such as sticks and stones) has a spiritual essence which must be reverenced as a manifestation of the all-pervading mysterious power that fills the universe.

*Others spoke of Wakanda, or Great Wakan, in the sense of a “supreme being.”

*Nature spirits provided guidance for understanding the humans’ place in the natural world. For many Indian cultures, relations with nature were just as important as human relations. These Indians believed that parts of nature, from birds to fish to rocks, were in some sense ‘people’ or ancestors of the human race.

*Despite the differences between the religious worlds of Europeans and Native Americans, there was no avoiding interaction. By the early nineteenth century, Native Americans had experienced the loss of and removal from their lands.

*Native Americans began to feel that trade with whites and alcohol consumption were damaging their cultures.

*Defeat in battle and the white encroachment also undercut many native groups’ confidence in the power of their traditional belief systems.

*Disease proved one of the most devastating attacks on the Indians’ worldview. Indians struggled to explain the terrible loss of life and their changing circumstances.

*The Indians’ response to Christianity, or what they called the “white man’s medicine,” was varied and often depended on local factors, such as how a certain tribe experienced disease, defeat, or removal.

*Many groups initially seemed interested in the secrets of the Bible, or “Great Book,” and were willing to convert in order to learn about what they saw as a potential source of power when ancient ways seemed insufficient to deal with their changing situations.

*If the expected benefits did not materialize, some rejected the missionaries and turned hostile.

*Despite the Indians’ initial willingness to participate in Christian practices, they did not abandon their belief system. Some even reshaped Catholicism to suit their own traditions, developing a Christian war ethic that prescribed prayer before battle, forbade scalping and warfare on Sundays, and enlarged the meaning of charity to include killing in defense of the community.

*While Native Americans adapted to the new ideas the whites brought, some aspects of the white man’s religion puzzled them, such as the perceived idea that it was ok to do bad things if they became sorry for those things, and the constant struggle and conflict among Christian groups on interpretation of Scripture and worship practices.

*Whether or not Native Americans accepted or rejected Christianity, the march of westward expansion took away Indians’ ability to continue their traditions without acknowledging the impact of life with whites.

*After losing their land, livelihood and being confined to reservations, Native Americans sought new ways to cope with their dramatically changed lives. Many native religions began to be driven by the vision of a new Indian culture free of whites. In the early 1870s native prophets in California began preaching about the eventual restoration of Indian culture and the defeat of whites. These prophets claimed that if “true believers” danced, prayed, and received visions of their dead relatives, fire or flood would purge the earth of whites and Indians would be free to live as they wished. These dances were called “ghost dances.” The dances continued until the massacre at Wounded Knee marked the end of the Native’s hope for a life free of Whites.

*Initially, missionaries set their sights on the conversion of the Indians, but after the massacres of many missionaries, the attempts lessened.

*Many Tribes believed that the missionaries were responsible for the disease epidemics.

*Westward expansion altered American society because new communities were often established without the social rules of the church to govern behavior.

*On the frontier, many Americans observed a decline in public morality and a rise in antisocial activities such as drinking, dueling, gambling, and prostitution. Some worried that if such practices were not curbed, the republic itself, based as it was on notions of responsible citizenship, was threatened with extinction.

*Missionaries were not the only means of introducing religion to the newly formed communities of the West. Migrants carried their religious background with them to their new homes. This inspired churches to reach out to the West with evangelizing programs.

*One of the greatest triggers for religious evangelization came with the discovery of gold in California in 1848. The gold rush caused a vast migration and the sudden emergence of a thrown together society exclusively devoted to ‘getting rich quick’, captured the attention of the nation.

*Fearing that the corruption in California would infect the rest of the country, this new need for evangelism replaced the attempt of converting the Native Americans.

*Indians were not the only inhabitants of America who were chased away from white settlements. Mormons also fled the persecution of the East.

*The Mormon Church demanded that the Saints, (as the believers were called), display cleanliness, virtue, industry, and complete obedience to the church in return for assured salvation.

*As the Mormon community grew and prospered, outsiders became envious and suspicious of them. Soon hostility toward Mormons grew to a fever pitch, and they were forced to migrate farther and farther west in search of a secluded area where they could practice their faith.

The Church of Jesus Christ of Latter-day Saints, known as the Mormons, originated in 1823 when a young Joseph Smith had a vision of God and Jesus. Later Smith claimed he had been visited three times by the angel Moroni, who told him of golden plates containing the lost history of the Americas. Smith translated the plates to write the scripture of the “true” church. After eighteen months of writing, Smith published The Book of Mormon in 1830.

*The first gathering of the church took place in April 1830.

*Smith claimed to have been endowed with divine power and declared that he had unquestionable authority to direct the Saints.

*Opposition to this new religion grew as people outside the church learned of the church’s approval of polygamy (marriage to more than one person at the same time) and the union of religion and politics.

*Critics charged that polygamy defiled the Christian family and that the blending of religion and politics sullied the ideals of the newly democratic nation.

*Despite hostility from outsiders, the Mormon religion prospered.

*Hostility toward Mormons grew in Missouri until 1838, when warfare broke out. Smith was arrested on charges of treason, and the governor of Missouri declared the Mormons a blight to be exterminated.

*The Mormons fled to Illinois, where they secured a charter for their own city, which they called Nauvoo.

*Illinois residents felt threatened by the growth of the town and felt jealous because they were shut out of Mormon commerce.

*Increasingly frustrated, they worked up an anti-Mormon hysteria and began to harass the Mormons. Both Joseph Smith and his brother Hiram were shot dead in 1844 by a group that stormed the jail where the brothers were held.

*Brigham Young succeeded Smith as the leader of the church.

*In 1845 the Illinois legislature revoked the Nauvoo city charter. 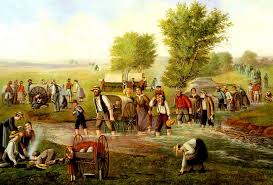 in present-day Utah along what is now called the ‘Mormon Trail’.

*Of all the emigrants to travel the Mormon Trail, the handcart companies were the poorest and the most determined.

*Handcarts were much like large wheelbarrows—wooden boxes on two large wheels with two long shafts for pulling. Followed by a supply wagon pulled by oxen, handcart emigrants pulled their belongings an average of 10 to 20 miles a day on dry, flat land and less when crossing rivers or trying to travel through sand or sticky mud.

*The Mormons had found their Zion and were successfully increasing their numbers to stave off their opponents.

* Before the troops reached the city, Buchanan withdrew them and pardoned the Mormons. Instead of destruction, the army brought the Mormons monetary gain, as they bought supplies and provisions when they marched through the city.

* At the end of the twentieth century, the Mormons remained centered in Salt Lake City and continued to grow as a community; the church counts more than nine million people as Saints.

Religion had a strong hand in shaping the West. It was a heavy force that strived to change native cultures, it stood in opposition of immorality in newly formed communities, and was rallying cry to believers seeking a safe haven from persecution. Many risked their lives to bring their religion to the frontier. In the end, the frontier struggles among those of both mainline Christianity and differing religious beliefs, helped secure the tradition of religious tolerance in America.

One Comment on “REGION 7: RELIGION (The Old West) Fun Facts”