Posted on February 27, 2019 by roadtripsandtinytrailers

ART & ARCHITECTURE OF THE SOUTHWEST

Human history in the Southwest begins with the arrival of the ancient Clovis people, a Paleo-Indian hunter-gatherer culture.   This culture remained in the area for several thousand years. At some point they were replaced by three great Pre-Colombian Indian cultures: the Ancestral Pueblo people, the Hohokam, and the Mogollon.

By the end of the 15th century, all three cultures had disappeared, and the Anasazi had settled in.  By the arrival of the Europeans in 1539, the American Southwest was inhabited by a very large population of American Indian tribes and Pueblo-an people groups.

The 1500’s brought Spanish conquistadors into the area, and the influence of each of these groups impacted all areas of cultural life, including art and architecture.

CHECK OUT THE OTHER LINKS FOR MORE ON REGION 9 THE SOUTHWEST:

*Their designs were inspired by nature and faith, so they depict the desert landscape, local plants and animals, and symbolic patterns and images.

*Materials like clay, turquoise, and silver were frequently used for pottery and jewelry.

*Some tribal symbols have become well-known. The Hopi created kachina dolls, which

were figures used in worship for life-sustaining needs such as more rain and successful hunting. Another frequent sight throughout the Southwest is the Kokopelli, a flute-playing fertility god.

*The Kivas located in the adobe dwellings were decorated with dry fresco wall paintings.  They were dimensionally flat, and were of deities and religious symbols.

FOR MORE DETAIL ABOUT ART IN THE U.S.,CHECK OUT THE SUMMARY HERE

*The Pueblo are known for their multi-storied dwellings. 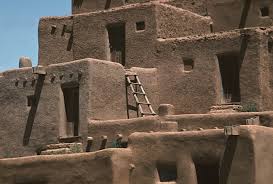 *The Pueblo people relied on adobe for practical and social reasons. Everything they needed to make the bricks was plentiful and available, and they were fairly simple to make. The finished bricks were also crucial in regulating the interior temperature of the buildings, maintaining a moderate temperature regardless of the extreme weather. They also blocked much of the sunlight.

*To create these structures, indigenous builders formed hand-shaped adobe bricks and laid them horizontally to build walls, which were finished with a coating of plaster. They placed vigas, or beams, across the walls to form the framework for flat roofs. On top of the beams, builders layered branches, grasses, and mud to form the roof.

*Using these techniques Pueblo builders erected one- to four-story apartment-like structures. Usually the dwellings had no doors and few windows, and entrance was gained by an opening in the roof and reached by a ladder.

*Re-plastering was necessary maintenance done by Pueblo women, a custom that Spanish women would continue in colonial New Mexico.

*Pueblo towns built of adobe took on a similar appearance and furthered communal relationships. Mixing, forming, and constructing with the bricks were involved processes that brought many individuals together and created tight-knit communities.

*Pueblo multi-storied housing blocks were typically arranged around a main plaza, which included a KIVA, or round semi-subterranean ceremonial room. The kiva was the

heart of the community and served both sacred and social functions.

*The beams that projected on the exterior beyond the walls, became a distinctive trademark of Pueblo architecture which Spanish colonial builders would use, and which can still be seen today in many contemporary New Mexican buildings.

FOR MORE DETAIL ABOUT ARCHITECTURE IN THE U.S., CHECK OUT THE SUMMARY HERE