ART & ARCHITECTURE OF THE BREADBASKET

Known as the “Breadbasket of America,” the Midwest region of the nation has many characteristics.  Most parts of the Midwest have a rural feel, where agriculture is a major part of the area’s identity.  From their roots in Native America

to the modern culture, Mid westerners certainly make an impact by doing. Nearly every part of society owes much to this region. Presidents and scientists, inventors and musicians alike come from this region.

And the Breadbasket states of the Midwest have left an indelible mark on art and architecture in America as well.  Thriving programs in major universities and art schools have given rise to varied communities of talented ceramicists, jewelers, fiber artists, painters and 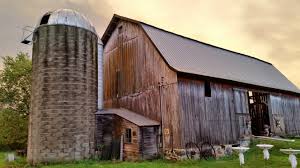 architects, all offering distinctive works of art and design.

CHECK OUT THE OTHER LINKS FOR MORE ON REGION 5 THE BREADBASKET:

*American Scene Painting is an umbrella term for American Regionalism and Social Realism (or Urban Realism).

*Much of American Scene Painting conveys a sense of patriotism and romance in scenes of everyday American life.

*American Regionalism arose in the 1930s as a response to

the Great Depression, and ended in the 1940’s near the end of World War II.  It reached its height of popularity from 1930 to 1935, as it was welcomed for its comforting scenes of the American heartland during the Great Depression. Despite some significant stylistic differences between popular artists, Regionalism was a fairly conservative and traditional style that appealed to the average American, while strictly opposing the perceived domination of French art.

*Before World War II, the idea of Modernism was not clearly defined in American art. There was also a struggle to define this uniquely American type of art. 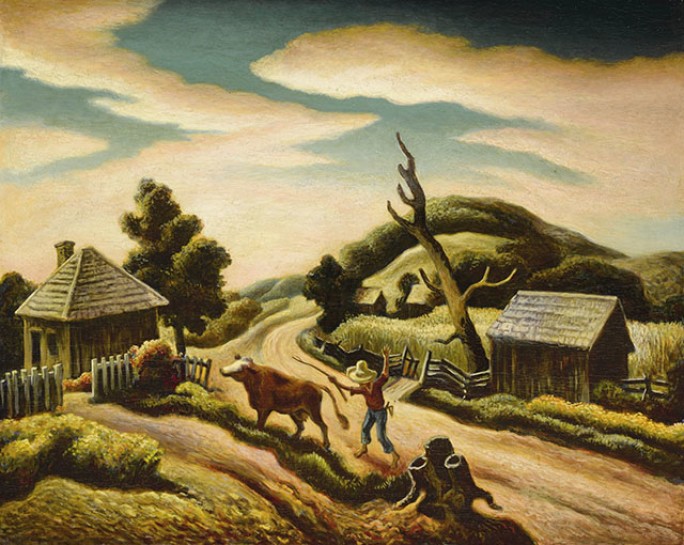 *On the path to determining what American art would be, some American artists rejected the modern trends emanating from the Armory Show and European influences. By rejecting European abstract styles, American artists chose to adopt a new style which portrayed American urban and rural scenes.

*Artists documented and depicted American cities, small towns, and rural landscapes. Many did so as a way to return to a simpler time, and others sought to make political statements and provided their art for revolutionary and radical causes.

*Social Realism followed Regionalism in popularity as it strived to bring attention to the social and political conditions of the working class, and criticized of the power structures behind these conditions.  At the time, the United States was still a heavily agricultural nation, with a much smaller portion of its population living in industrial cities.

*American Regionalism is best known through its 3 favorite artists: Grant Wood, Thomas Hart Benton, and John Steuart Curry. All three studied art in Paris, but devoted their lives to creating a truly American form of art. They believed that the solution to urban problems in American life was for the United States to return to its rural, agricultural roots.

*Regionalism has had a strong and lasting influence on popular culture, particularly in America. It has given America some of its most iconic pieces of art and illustration that symbolize the country.

*Craftsman style homes rely on a traditional design. Known for their ‘cottage-like’ feel,

these homes are usually multi-level with attics. This style is popular in older neighborhoods in Midwestern states and the design is considered to be domestic, originating in the 19th century. Low pitched roofs, overhanging eaves, and hand-crafted stone or woodwork are all features of this style.

*The Midwest is a region rooted in agriculture, so it’s no wonder that a popular home

style is the Farmhouse.  These houses are usually multilevel with large family rooms and large, often wrap-around porches. They tend to be open and roomy, which was good for airing out and cooling a home in the days before A.C. If you’ve ever visit one of these homesteads, you’d fall in love with their old-fashioned charm!

*The Bungalow is a descendant of the American Arts & Crafts movement, with a style that is in keeping with Arts & Crafts.  It is simply smaller.

*Prairie Style buildings appear to grow out of the ground, with a low pitched, overhanging hipped or gable roof, windows set in groups, and an entrance that is typically secluded.

*Modernism in architecture is defined as a design with an emphasis on form rather than ornament. Structure and materials rather than artistic constructions, and the rational and efficient use of space.  It reconstructs the way humans lived in and used the natural environment, whether buildings or landscapes.

The Breadbasket States of the Midwest are the birthplace of American Modernism, and offers a rich history of architectural styles.  In many of these styles the pioneering spirit lives on and continues to create harmony with natural surroundings, natural materials, structure and creativity.

← HOW TO USE THIS WEBSITE
REGION 4: ART & ARCHITECTURE (Blue Grass Country) Fun Facts →