Posted on February 28, 2019 by roadtripsandtinytrailers

ART & ARCHITECTURE OF THE OLD WEST

The art of this region begins with the first inhabitants of North America who most likely migrated from Asia across the Bering Strait (See First Folks for more information). They developed many distinct dialects and cultural traditions, out of which grew a wealth of artistic styles. Much of this artistic heritage was ignored or lost as the presence of European colonialists increased. As time passed, exploration, settlement and migration by people from Spain, Great Britain, France, and around the world created the artistic culture on which American art flourishes.

Western art was inspired by the land and the people of the American West, particularly in the period during and shortly after white settlement of the area. It was practiced first by explorer-artists and later by permanent settlers. While strongly influenced by European traditions from Colonial times, they fused the painting, drawing and sculpture 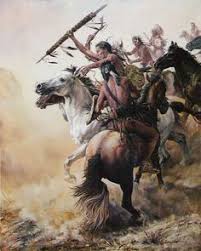 that often depicted the violent events that helped to shape the settlement of the Old West, as well as the everyday struggles and joys of life in the new frontier. The artistic achievements of this area, from Native North American art to contemporary forms of expression, is rich and diverse.  These include movements such as Wild West and Frontier art and the Hudson River School.  Despite expansive growth and increased prosperity in 19th century, however, in the early 20th century, the region was still considered artistically backwards with many American artists choosing to study abroad. This changed dramatically with the exile to the United States of many European intellectuals and artists during World War II.

The time period most famous in the new American frontier that we call the Wild Wild West, is the post-civil war era, 1865-1895.  This age of gunslingers, outlaws, cowboys, Indians, saloons, gold and trains is more romanticized than factual, but we still keep that fascination alive thanks to the movie-makers, authors and the artists of that time period.  Let’s explore a little more about the art of the Old West.

CHECK OUT THE OTHER LINKS FOR MORE ON REGION 8 THE NORTHWEST:

*Art of the American West consists of historic and contemporary works of art which focus on varying expressions of individuals, landscapes, ideals, and myths of the American West. It includes a wide variety of artistic traditions from Euro-American and Native American peoples, spanning across the Southwest, Plains, and Rocky Mountain regions.

*Art in the West has been around since the mid 1800’s, and includes oil paintings as well as bronze sculptures.

*Western art did not gain popularity and become recognized as a legitimate genre until after WW11.

*Many artist/explorers went with expeditions to chart and record the new unexplored western terrains and peoples.

*Traveling minstrel shows in the 1840’s, paintings exhibited back east to the curious public (showing the majestic landscapes, Indians, the Cavalry and cowboys), and P. T. Barnum’s carnival circus that introduced Indian chiefs, dances, and other Wild West exhibits in his exhibition halls are what brought the American West and it’s art into view.  These things also helped further the folklore and romance of the West.

*Large scale awareness took off when the dime novels appeared in 1859. By simplifying reality, and exaggerating and ‘recreating’ reality, the novels caught the population’s attention with fabricated stories of savagery and bravery, and created in the public’s mind stereotypical images of heroes in white and villains in black, courageous ranchers and savage Indians, temperate lawmen and merciless outlaws, brave pioneers and ruthless cattlemen and railroad men.

*When viewing ‘Western Art’ look for:

-Pride in the American pioneer spirit.

– A deep respect for the wildlife of the region.

-A confident opinion that there is no beauty on Earth that surpasses that of The West. 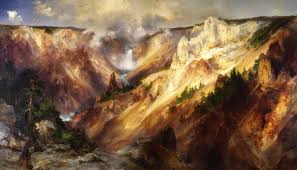 its own artists accountable. It has managed to create and maintain the highest, most exacting standards, equal to any found anywhere or at any time in history.

*It is a wonderful and truly American phenomenon.

FOR MORE DETAIL ABOUT ART IN THE U.S., CHECK OUT THE SUMMARY HERE

*The Iconic Western ‘FALSE FRONT‘ architecture is a type of commercial architecture used in the Old West of the United States. Usually used on two-story buildings, this style features a vertical facade with a squared-off  top, often hiding a gable roof.

*The goal for the architecture is to project an image of stability and success, while in fact a business owner may not have invested much in a building that might be temporary.

*The False Front was often added to temporary structures such as large tents for stability. Tent colonies were commonplace in the early years of westward expansion and the gold rush era.  The False Front continued even after buildings and towns became permanent, as every merchant wanted to create an immediate and memorable street presence, but needed to build it fast and cheap.

wood framing, clapboard siding and bold signage to announce the business. The street façade often would extend half a story or more above the roof behind it. The primary goal was to create the illusion of prosperity with a quick first impression.

*The towns of the Old West were in their heyday during the Victorian Era.

*The most common Victorian styles used in the Old West were:

Stick Style: Having its gable end nicely delineated by pronounced stickwork. The grid of vertical and horizontal boards seems to support the windows and wall, while diagonal boards in the eaves “brace” the roof.

*The Old West Era was a relatively short one. Many scholars believe that the winter of 1886-1887 when thousands of cattle died and temperatures reached well below freezing in most parts of the West marked the end of the Cowboy era. By 1895, booming gold towns, railroad towns and prairie homestead towns were ghost towns.

FOR MORE DETAIL ABOUT ARCHITECTURE IN THE U.S., CHECK OUT THE SUMMARY HERE