Posted on March 11, 2019 by roadtripsandtinytrailers

ART & ARCHITECTURE OF THE ORIGINAL COLONIES

During the 16th and 17th centuries, the art of the Colonies centered around nature, still lives and portraits.  Portraiture remained the most popular type of painting throughout the colonial period, and the likenesses of the elite hung in the

homes and mansions of these families.  Portraiture was also looked at as an art form embodying the ambitious ideals and tastes of a wealthy society.  As the colonies grew in population and economic strength, European artists came to the colonies for portrait commissions.

By the 18th century, luxury homes were being designed in the Georgian & Federalist styles and

decorated in Rococo and Baroque.  British imports were all the rage.  As the Revolutionary War drew near, colonists began to turn to their own for American made furnishings, decorative arts and paintings.

CHECK OUT THE OTHER LINKS FOR MORE ON REGION 2 THE ORIGINAL COLONIES:

*The first art produced in America (when it was the New World) was done by explorers, trappers and sailors as they recorded in pictures what they found in the New World.

* The earliest art that was produced, once the colonies were established, were

tombstones and shop signs.  The ‘skull with wings’ found on many New

*The types of art that followed were sculptures that stood in front of shops, and masts for sailing ships.

*In the 17th century, the North American colonists had neither the finances nor the time to collect much in the way of fine arts.  Colonial artists working in pewter, silver, glass, or textiles followed European examples, but by the end of the century, the colonies were thriving and American art began to flourish.

*As 18th-century American colonists (prior to the Revolutionary War), grew more prosperous, many sought to make a name for themselves and be remembered.  Portraits fulfilled this wish.

*The 17th-century limners (untrained, anonymous artists working in the colonies) painted crude but often charming portraits in the Elizabethan style (style popular during the Reign of Queen Elizabeth of England), the Dutch baroque style, or the English baroque style (respectively below), depending upon the European background of both artist and patron.  The style of the limners was flat and simplistic, but remained popular well into the 19th century.  It was also a purely American style. 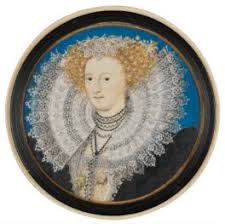 *One of the challenges that early American painters faced, was that patrons (mostly wealthy New England merchants and businessmen) requested a sophisticated style, like that of  the English tradition of portraiture. Colonial artists, however, had almost no access to the examples or the

training necessary to develop a style in the English tradition. John Singleton Copley and his peers studied mezzotint reproductions of English portraits. Mezzotints were engraved copper plates used to reproduce paintings.  They were important because they could be bought and sold inexpensively, and gave artists in the colonies access to art from England and the rest of Europe.

*You may notice that boys were often painted wearing what we would identify as dresses.  This was called ‘breeching’.  A boy could wear pants when he became able to be ‘reasoned’ with – usually around age 7.  It was a kind of ‘coming of age’ milestone for a boy.  It was also more practical for the young years, as diapers hadn’t been invented yet.

* The two artists that dominated the scene during this time period were Benjamin West and John Singleton Copley.  They painted portraits of the wealthy and prominent, as well as scenes from the lives of those early leaders of America.

is an architectural style from a mother country that has been incorporated into the buildings and settlements or colonies of distant locations. But Pilgrims from England were not the only ones coming to the New World, and people brought with them cultures, traditions and architectural styles from all over.  American Colonists built settlements that copied the architecture of England, blended it with the design characteristics of their new lands, and created uniquely American designs.

Time period of approximately 1626 through 1725. There are more houses constructed by America’s earliest settlers in Essex County, Massachusetts than anywhere else in the country.

*Characteristics of a First Period building include a steeply pitched roof; a slightly asymmetrical plan; and a central chimney. The first period structure is distinguished from later ones by its exposed frame in the interior. Some early windows may have had no glazing, but the standard first period window, until at least 1700, was the diamond-paned casement. No example of this type of window still exists.

Styles of buildings, popular during the reigns of King George II and King George III were, in England, built in brick, had wood trim, wooden columns and were painted

white. In America, however, there were both brick buildings and those built with wood and clapboards. They were oftentimes painted a pale yellow. This differentiated them from most other structures that were usually not painted at all. They were primarily box shaped with multiple chimneys.

A Georgian colonial home usually has a formally defined living room, dining room and sometimes a family room. The bedrooms are typically on the second floor. They also have one or two chimneys that can be very large.

This architecture marks the end of the Colonial Era, and Americans wanted

buildings and homes that expressed the ideals of their new country, and  displayed an independent identity.  They also wanted the look of elegance and prosperity.  The Federalist style borrowed Neoclassical details and fancied up the Georgian design.  They were given porticoes, balustrades, and other more elaborate features.