Posted on March 14, 2019 by roadtripsandtinytrailers

Acadia refers to the North East area of North America that was initially settled as a French colony.  It would eventually be divided into British or Canadian provinces and  American states.  Although we’ll use the terms Canada, Acadia and the North East interchangeably and understand that they all have unique identities, know that we’ve lumped them all together and called the area New Europe.

(Large numbers of Acadians immigrated into Louisiana -Region 3- between 1765 and 1790).

Art in New Europe is marked by thousands of years of habitation by First Nations Peoples, followed by waves of immigration, which included European artists and other crafters with heritages from countries all around the world. Acadian art reflects these diverse origins, and artists have adapted traditions and influences to reflect the reality of their lives in the east of North America.

The Colonial Architecture of New Europe is  closely linked to the designs and styles developed in Canada, Europe and the United States. However, designs have long needed to be adapted to the North East’s climate and geography, and at times has reflected the uniqueness of the area’s culture.   In most of the area, building materials are plentiful, and the price of lumber and stone are low.  For the most part, the NE is safe from the

major natural disasters that affect the architecture of other areas. However, the climate needs to be considered for every structure.  Good insulation is a must and structures must be designed to survive the repeating cycles of freezing and thawing that can shatter stone and ruin foundations.

CHECK OUT THE OTHER LINKS FOR MORE ON REGION 1 NEW EUROPE:

*Aboriginal Art  was being created in Acadia for

thousands of years prior to the arrival of European settler colonists. Like the peoples that produced them, Indigenous Art traditions combined the territories of Canada

States. Art traditions vary enormously within these diverse groups, but one thing that distinguishes Indigenous Art from European traditions is a focus on art that tends to be portable and made to be carried or worn and/or used ceremonially.

*French Colonial Art was popular between 1665–1759, and it was the Roman Catholic Church in and around Quebec City that first provided artistic patronage.  Most subjects were limited to religious Christian themes, and abolitionist and missionary endeavors.

The style was similar to High Renaissance and the artists rarely signed their work.

*English Colonial Art was popular between 1759-1800.  The battle for Quebec left many British soldiers garrisoned in various locations in the territory. While off-duty, many of these soldiers sketched and painted the Canadian land and its people, which were often sold in European markets hungry for exotic but unknown glimpses of the colonies. Drawing was also required by soldiers to record the land, as photography had not bee

The main themes were Portraits,

Landscapes, Religious scenes and depictions of the Acadian Expulsion.

In Lower Canada, artists evolved independently from France as the connection was severed during the French Revolution.

artistic group and style of painting. They believed that a distinct Canadian style of art could be developed through direct contact with nature. The Group of Seven is best known for its paintings inspired by the local landscape.  Historically, the

Catholic Church was the primary patron of early art in the area, but in later times artists have combined British, French and American artistic traditions. At times they embraced European styles and at other times worked to promote nationalism by developing distinct styles. Art in the region today remains the combination of these various influences.

*Wigwams were wood framed structures, covered with an outer layer of bark, reeds, or woven mats shaped into a cone or dome. These groups changed locations every few weeks or months. They would take the outer layer of the wigwam with them, and leave the heavy wood frame in place. The frame could be reused if the tribe returned to the location at a later date.

*The Long House was a large rectangular structure that held a large number of people. They were built with a frame of saplings or branches, covered with a layer of bark or woven mats.

*Nomadic tribes that settled on the Prairie lived in Teepees.

*The Teepee  consisted of a thin wooden frame and an outer covering of animal hides. The structures could be set up quickly, and were light enough to carry while following the bison herds.

*Some of the most impressive First Nations architecture was that of the permanent tribes of the west coast such as the Haida.  They lived in Bighouses.

*Bighouses were large square, solidly built houses. They were brightly painted with artistic designs and often had a totem pole at the front door.

*In the far north, tribes lived in Igloos.

*An Igloo was a domed structure made of snow, which was quite warm. In the summer months,  tents made of animal hides were used. Whale bones were often used for the frame.

*These early settlements were most concerned with defense  – from both the First Nations People and the English.

*Most cities were made up of a large fortress and protective walls.  The cities were divided into two areas. The Upper Town contained the fortress, homes of the ruling class and churches, and the Lowe

r Town was the commercial center and home to the working class.

*These structures were made of stone and decorated in the Baroque architecture that was popular in France at the time.

*Largely populated by immigrants from Normandy in Northwestern France.

*Rural farming structures had french features with modifications made necessary by  the environment.

*The home of the New France farmer remains a symbol of French-Canadian nationalism.

*These were wooden or stone, rectangular structures of one story, but with an extremely tall and steep roof, sometimes almost twice as tall as the house below. 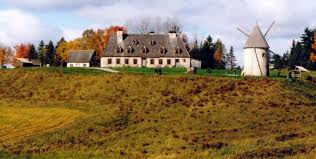 *Landmarks in the rural areas were the churches and the mansions of the seigneurs (the representative of the ruling French King over each of the Parishes). The seigneurs built much larger but not ornate homes for themselves.

*Each parish had its church, (often duplicates of major churches in Quebec City or Montreal). A unique style of French-Canadian church thus developed.

*Introduced in the 17th century by the Puritans from England.

*Foreign Protestants also influenced the architecture of the region as styles were borrowed from Germany and Switzerland.

*Victorian architecture dominated in Canada from the mid 19th century to the First World War.

*1795-1790: After being expelled to France, many Acadians (living in present day Canada) were recruited by the Spanish government to migrate to present day Louisiana state, where they developed what became known as Cajun culture.

*This style of architecture is still found in Louisiana.

Acadians blend maritime Canadian and West Indian styles that are

raised on piers to protect them from flooding, termites

and heat. They are characterized by a rustic style that is reflective of the French countryside, and features strong French and Cajun influences in both architecture and culture. Homes have Georgian style floor plans that are two rooms deep, plus a central hallway and chimney. Most Acadian floor plans are 1-1 1/2 stories high 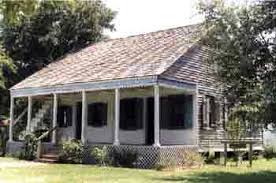 and have a steep gabled roof. This provides space for an attic sleeping area. High-pitched hip roofs are among the signature features of Acadian style homes: they add to the rural charm of the homes while also making it easy to shed rain, snow, or debris created by time and weather. These styles are also popular in the South.